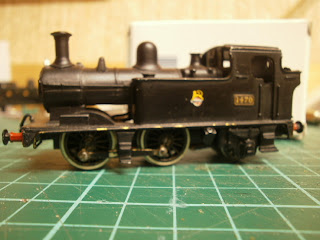 Wen I first began in 3mm, I thought I would test the water by building a loco, coach and wagon to see if I could make it work.
So I chose a 14XX 0-4-2 Tank! The Chassis is one of those produced by 3SMR, simple, two sideframes and coupling rods Society brass chassis spacers and Romford wheels. I must admit that it went together beautifully, the body had the cast handrails removed and handrail knobs and wire replaced them. Top feed on the boiler and push pull pipes along the footplate and it was finished. It ran well until Wilton. It stood there attached to its Autotrailer, Driving wheels spinning -the trailing axle had somehow seized. This meant removal of the body and offending axle, clean bearing and axle, replace and all is now well. I had used some model grease when the locos were serviced before the last show and I believe that is what caused it -moral-stick to what works for you.
Posted by Steve Fackrell at 12:39