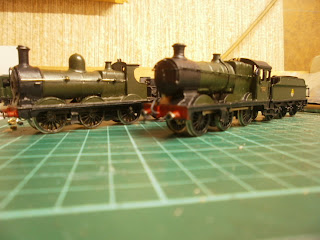 Two tender engines have now arrived for use on the new layout. The first, in the background, is a Dean Goods, bought from S/H stall. This has an ECM motor/gearbox fitted, a little noisy but this will improve with running. Chris Hardy wheels are fitted, the centre flange having been ground off. Needs a pair of cabside plates, probably make these from etched kit.
The second is a Collet Goods, made from a Gem kit, this has been cut along the centre  reduced in width (for a Tri-ang TT mechanism) by Nigel Cullimore. A Brynkits chassis is fitted with Romford wheels, Mashima 9/16 motor and Branchlines gearbox. Both have run on 'Hennock' but are too long for a normal length train due to fiddleyard restrictions. Both need smokebox numbers, these I will make from pressfix numbering.
The Dean Goods is going to be subject to Modellers Licence, most were gone by the early Fifties and few appeared in Devon as far as I am aware. . However Bob Brown has given me a couple of possibles seen in the South West.Further examples would be welcome-please let em know.
Posted by Steve Fackrell at 12:17