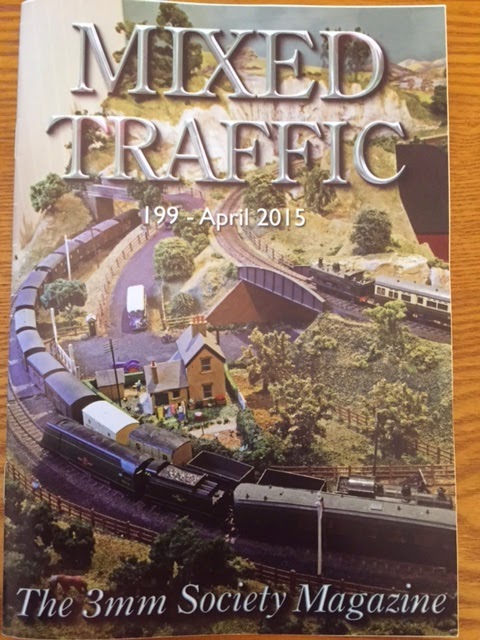 Please accept my apologies for the delay in reviewing the latest Mixed Traffic which appeared over two weeks ago.
Edition 199 is a mixture of nostalgia and current thinking. Our editor starts the ball rolling with suggested landmarks in the Society's history . Simply put suggestions are invited for the finest models produced over the last fifty years- with some very worthy examples.
Howard Love looks at his stash of twoits- and recounts the ways in which some were completed after a number of years in varying states of building.Peter Bossum constucts an oil tanker for Hoath Hill whilst Ian Fraser describes the building of one of his articulated Andean Beyer Peacock Meyer locos.
John Carter continues his saga of layout building and John Sutton shows a photo to inspire a street scene worth modelling.
Returning to nostalgia see's two pioneers celebrated and a pair of Eric Brutons photo's of Western Region Halls- there is also a list of Society Officers who have served over the last half century.
Photos include members exhibiting at Southampton Model Railway Exhibition, Bob Browns new layout- Chipping Compton shares the centre pages with Teignford by Steve Fackrell.
Add to this the usual Blastpipe, Bits & Pieces and Tail Lamp and another excellent read has been produced.
There is also some good news about certain wagon kits being offered at half price for a limited time- this will boost the rolling stock-again!!
Posted by Steve Fackrell at 06:30