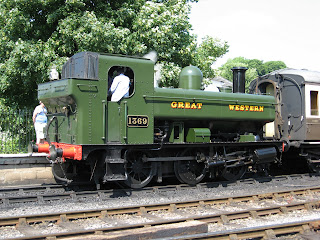 Another picture from the South Devon. This time an outside cylinder Pannier, the only surviving example of Collett's 1366 Class. Built to work around sidings and tight curves of docks, 1369 spent most of her time at Swindon. Then in 1960 was transfered to Weymouth to work the harbour trains, fitted with a bell to warn other tramway users. Spent rest of her life working China Clay trains. Bought from BR by the then Dart Valley Railway for around £650 so I believe. Beautifully restored the loco makes a lovely sight waiting for the signal to move off destined for Totnes Riverside.
Posted by Steve Fackrell at 08:13