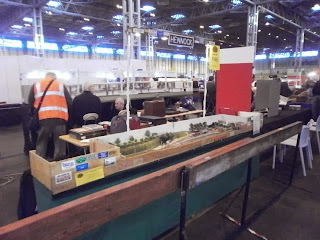 Well we are safely back home after a very enjoyable weekend up north.
Few pictures I'm afraid as little time could be had trying to take pictures- I was told that 17,000 came through the door on Saturday alone.
Still, here is Hennock set up on the Friday evening with the electrickery checker having passed our set up.
Bob and Tamzin were building stuff- a couple of Bob's buildings are shown below- sorry that the pictures don't do them justice!
The food was excellent, some of the best we have had and plenty of it. Unloading and loading didn't take as long as I anticipated so we left at a reasonable time and arrived home at a decent hour. So all in all a good couple of days- good chat and company- what else do you want?
P.S. Will show some of the goodies later in the week! 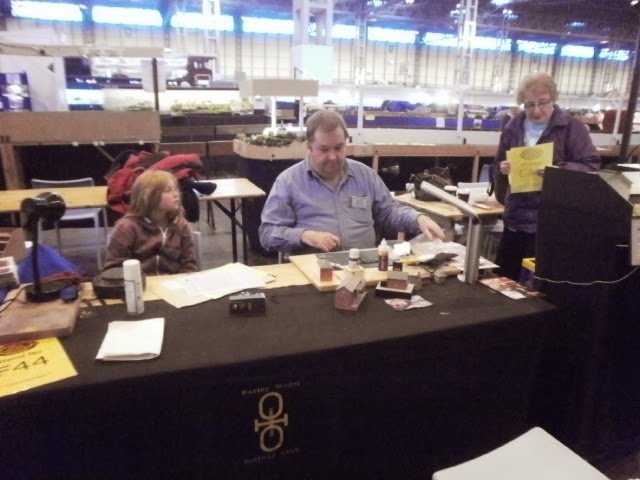 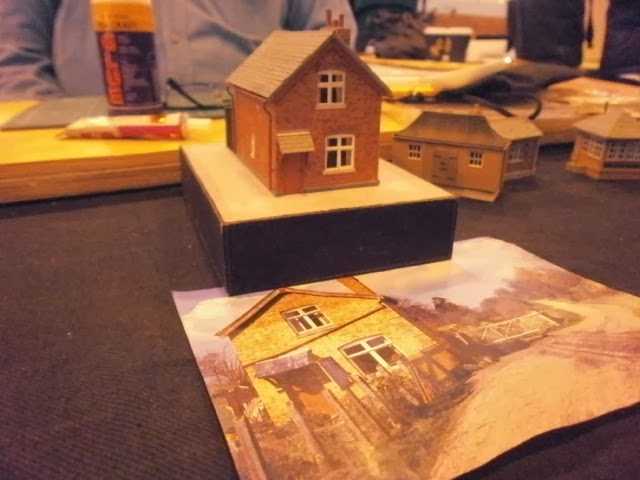 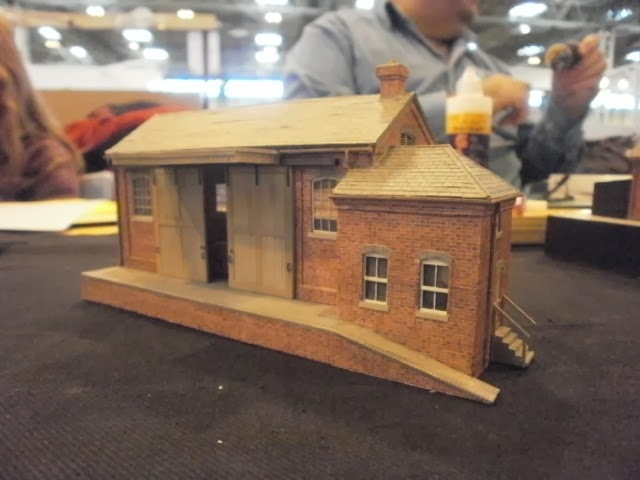 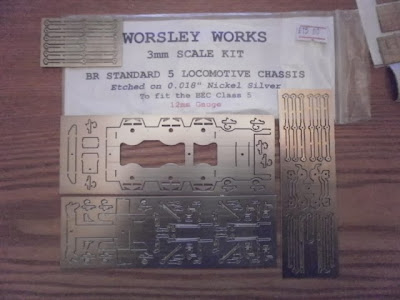 Another impulse buy was a Standard 5 cast whitemetal body by BEC. Then I found the chassis for it- yes I know it says 12mm but is actually for 14.2.
I should have gained enough knowledge thinning down the 700 chassis to be able to tackle this one.
Another reason is that there was a lengthy article in Mixed Traffic on producing this engine so will have a good read of that first- If nothing else it does pay to become a member of the 3MM Society- someone has usually done it and made the mistakes for you!
Posted by Steve Fackrell at 06:30 No comments: 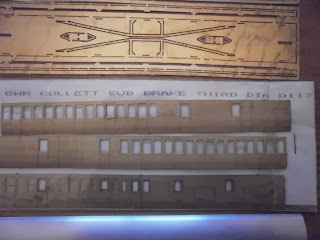 I struck lucky with these! A pair of coaches by Worsley Works from the Society Secondhand stand at West Byfleet.
A pair of floors and ends plus sides- one seems to be the original Comet type with etched windows with door frames in various positions- easier to glaze.
Also managed to get twenty odd coach wheeled axles so it should mean I can make all the kits I have-result!
Anyway as you read this- think of us slaving away at Warley- it's a pleasurable job and someone has to do it!
Posted by Steve Fackrell at 06:30 No comments:

Hennock is being loaded to day and the journey to Birmingham started about lunch time.
Hopefully we will arrive about tea time to set up and make sure that it works. If you are visiting please come and see us, Hennock is stand F46- there is also a demonstration of 3mm at this years show plus Andy Shillito's Wantage Tramway. 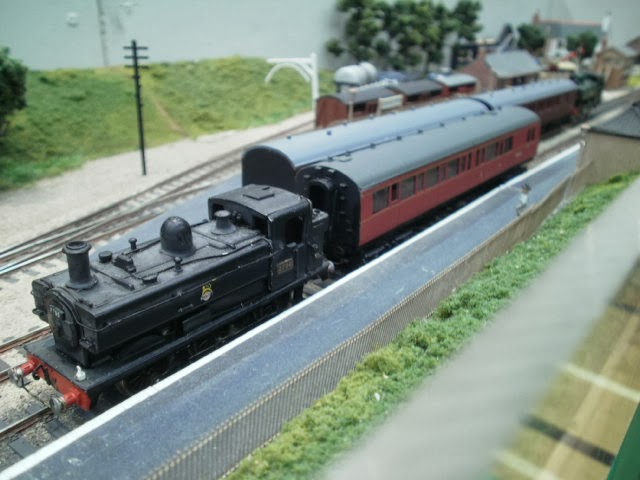 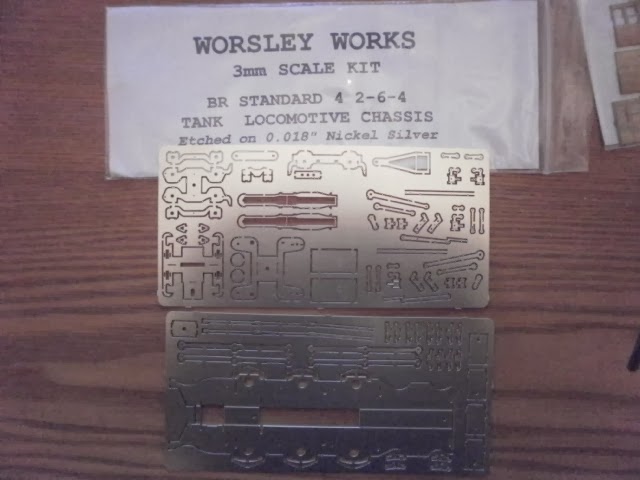 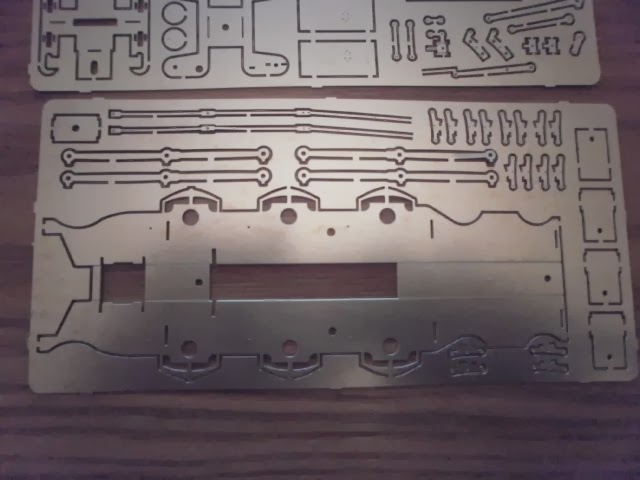 Looking into the future, there is much that needs building for Swanage.
Already being made is the M7 and 700 Class 0-6-0. So the next will be a class 4 Standard Tank. The chassis is a fairly new offering from Allan and is etched to his usual high standards-sorry about the pun!
I have been promised a body so looking forward to the first of several Standard Class engines. 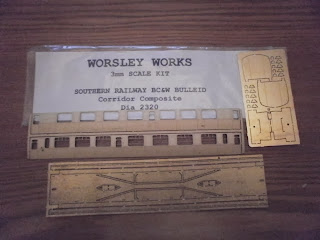 The brass stack is growing!
The third Bulleid coach to complete the three coach set is the Corridor Composite Diagram 2320. I have a feeling that this is the differently vented type than the two Brakes I have.
Still Alan didn't have any of the same type so this is what it will be!
Well etched it is just a matter of cleaning up the attachments to the fret and soldering together-Simples! 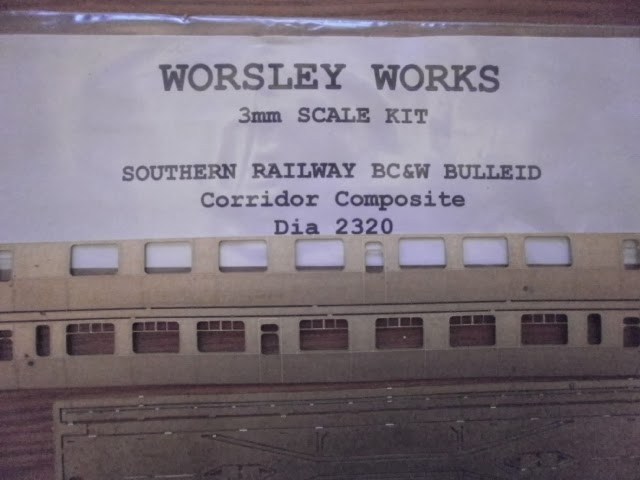 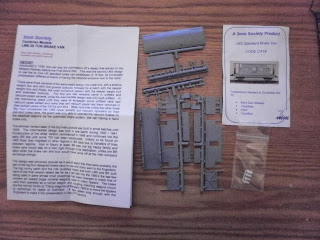 Seems a long time since the last post. Other things have had to come before the blog-time is at a premium.
However, lots of things have happened, an exhibition, at Poole and the yearly jaunt to the 3mm meeting at West Byfleet where the winters projects are purchased or those needed bits found.
The most notable thing is this new LMS Brake Van. The wagon is in honour of Eric Bruton whose photos still grace the pages of Mixed Traffic.
The kit is produced by Cambrian for the 3mm Society and well moulded in grey plastic. Cursory examination show a few departures from other kits. Firstly the chassis is moulded with the side frames. This makes a rigid foundation from which to hang the step boards etc. Secondly the handrail holes are already started for you- no excuse for differing length handrails or some not in the right place. Really looking forward to building this one- watch this space. 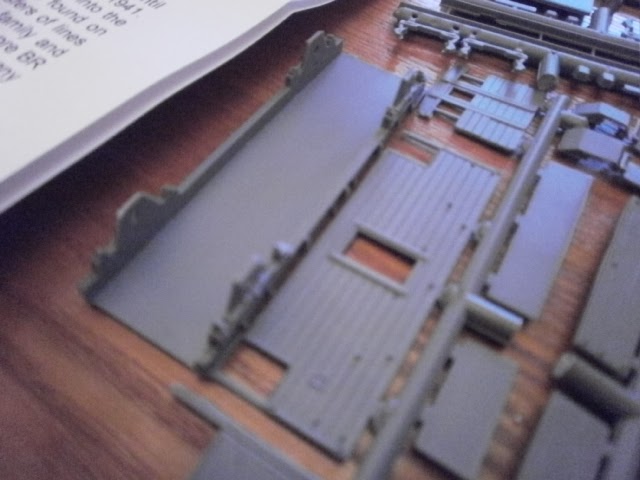 Well its a busy weekend for us.
Tomorrow-9th November we are making the trek to the 3mm Society annual do at West Byfleet.
Christmas lists and wads of cash are what is needed this year- we arn't taking a layout this time so all time can be used searching for those bits we need.
On Sunday-10th November we take 'Hennock' to the Poole MRS Exhibition at Poole Grammar School.
Being Rememberance Sunday always means a couple of minutes silence at 11am- something of a tradition over the years and one that is always impecably observed.
Hope to see some of you over the weekend.
Posted by Steve Fackrell at 06:30 No comments: 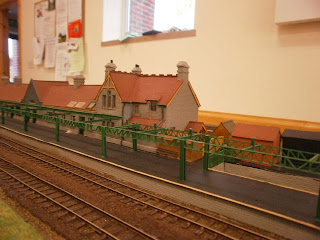 No excuse but a couple more pictures of our new (to us) layout.
It really has the group enthused and raring to go to get the track and buildings transferred to the new boards.
This we hope to begin at our next meeting so watch this space.
A very good November meet was had but we could do with a few more regular members.
Any offers? 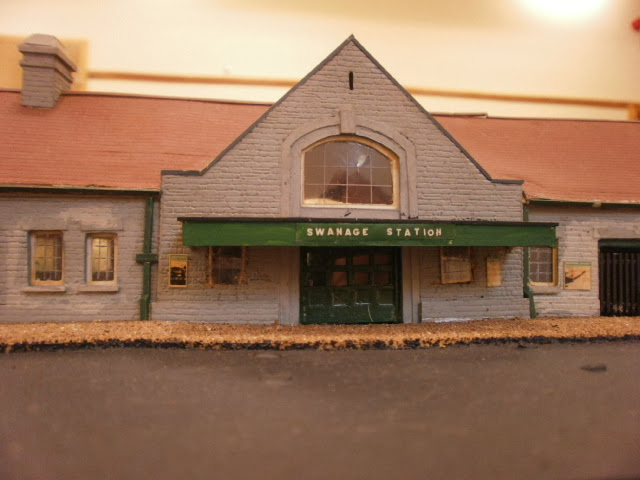 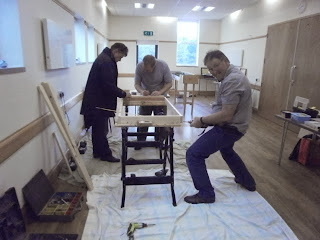 Basboard building by the Dorset Group- after all the hobby is supposed to be fun!
Here we see a few bits of wood being calmly assembled into the new baseboards for Swanage.
3"x1" frames topped with some decent 9mm ply will be the new base for the sadly warped original.
Last picture shows the original layout alongside it's new base- at twelve feet it means that we have to recreate the now lost boards but we have the plans, pictures and expertise (joking about the expertise!)
to let the laytout rise again to it's former glory. 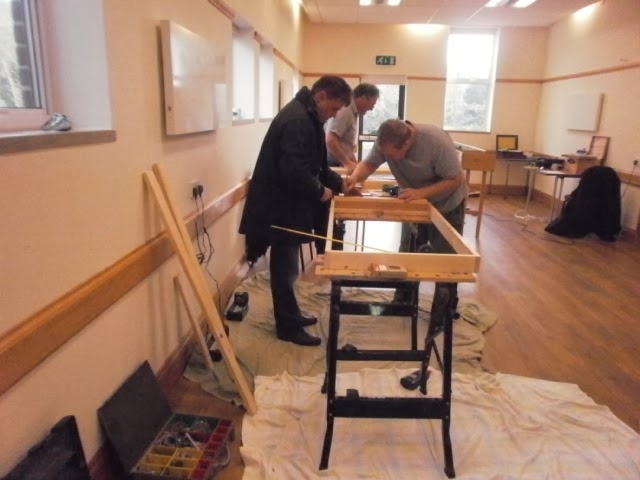 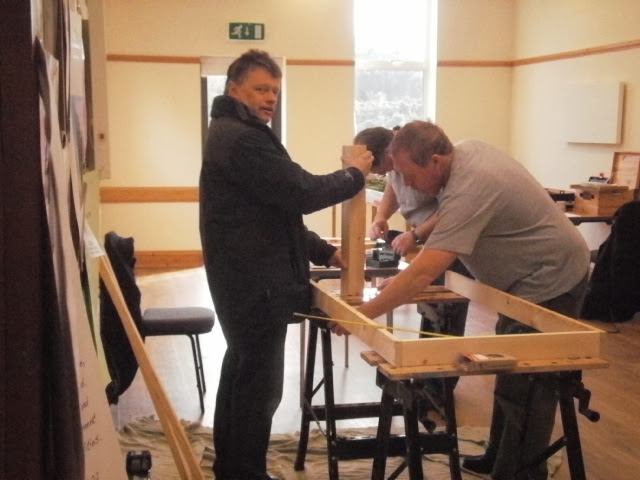 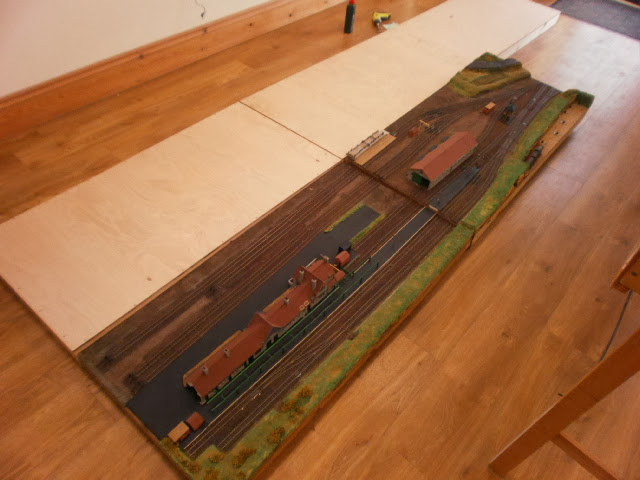 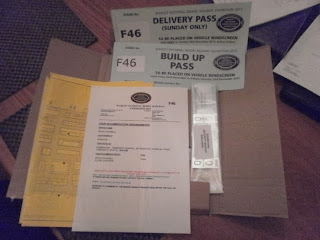 I must admit that this is professional!
As if having Hennock mentioned on Facebook wasn't enough this package arrived in the post.
I found out about it's arrival whilst luxuriating in the Trim Castle Hotel in Ireland- the castle was where Braveheart was filmed- my sister in law has Mel Gibsons wig that he wore in the film by the way!
This pack is impressive, and I have had a few in my time, even telling me which room, at which Hotel I will be staying.
Tamworth hopefully has some curry houses, after all Birmingham is the curry home isn't it?
Posted by Steve Fackrell at 06:30 No comments:

Encouraging the next generation of modeller. 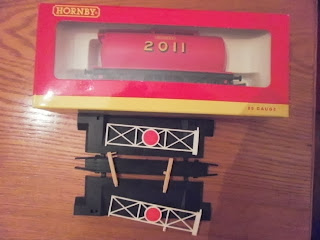 Yes I know this is not 3mm but it will be a means to an end!
My Grandson, Thomas, is nearly three. He loves all things steam -Swanage Railway, Great Dorset Steam Fair etc. etc. He has LEGO trains but he wants a railway like Gramps!
So- who am I to argue?
I have been aquiring a train set for a three year old, nothing complicated, just a small layout to encourage his enthusiasm- don't worry I will get him into 3mm at a later date.
It really is encouraging that when mentioned to fellow modellers they are really supportive. I bought a basic set from Wimborne exhibition, Simon Kohler sold me a couple of promotion engines for a song and this, the latest, which is a wagon from the year of Thomas's birth. Add to this a Red Arrows van, Polo tank, Tango van and you get the idea. All a three year old wants is movement and recognition of something that he knows. All I have to do now is build the baseboard and hopefully Christmas will be a quiet time for me but a fun time for a three year old starting the journey to become a proper modeller.
Will the layout be scenic-NO! A plain board on which he can draw his roads, station, trees etc will develop his awareness of his surroundings and plant a seed!
Posted by Steve Fackrell at 06:30 No comments: