This quarter the Newsletter seems a little incomplete- thats because I forgot the publishing deadline which is the reason no Dorset Group news was included.
However, all is not lost, Group dates and activities are contained in the Dorset Goup page- see left- which are regularly updated.
The main reason for this ramble is a piece by the chairman, encouraging all members to suggest and submit ideas for layouts, in 3mm scale of course, which would fit into modern living spaces.
Ideas and plans could be used to build a library to share with visitors to the Society website.
A good idea to encourage use of 3mm Scale themed to fit with the domestic environment.
Posted by Steve Fackrell at 06:30 No comments: 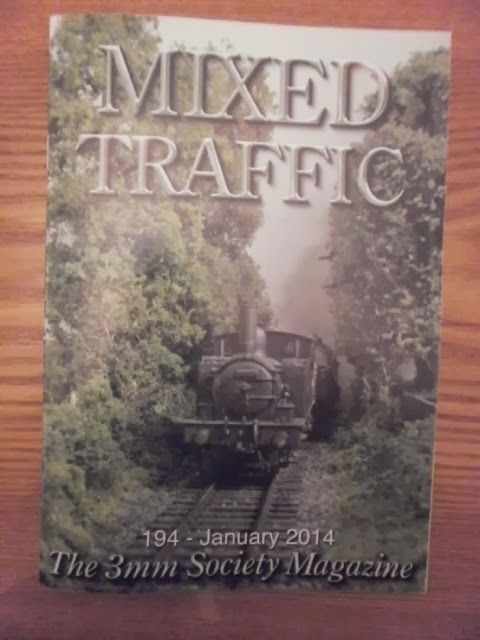 The latest edition of the in house quarterly of the 3mm Society has landed on the doormat.
In an edition packed with excellent photographs, the written content is very informative.
Peter Bossom kicks it all off with an essay on building a Southern Mobile Tank Transporter, a very distinctive wagon superbly modelled. Following this, personal experiences with DG couplings are related by Tony Briddon and Paul Hopkins describes the background of his latest layout and experiences when attending exhibitions.
Prototype buildings provide inspiration for modelling projects together with thoughts of part relief interpretations. This ably described and suggested by John Sutton , the editor.
A suggestion of building a bit of nonsense turns out to be a very thought provoking piece by Graham Shirley on an alternative chassis construction method. Jacques Gerber suggests ways of baseboard building using lightweight foam board and suggests suppliers of fitting for this increasingly popular material.
Eric Brutons classic photos depict an LMS Compound and a Hawksworth 15XX whilst  Adrian Westbury takes on the challenge of constructing a Southern USA Tank. Still on a Southern theme, Steve Fackrell describes the saving and rebuilding of a layout which for many years languished in the booking hall of the Swanage Railway.
An informative Blastpipe and Whats New? conclude yet another issue, not forgetting several adverts which promise additional items for the 3MM Modeller.
Posted by Steve Fackrell at 06:30 No comments: 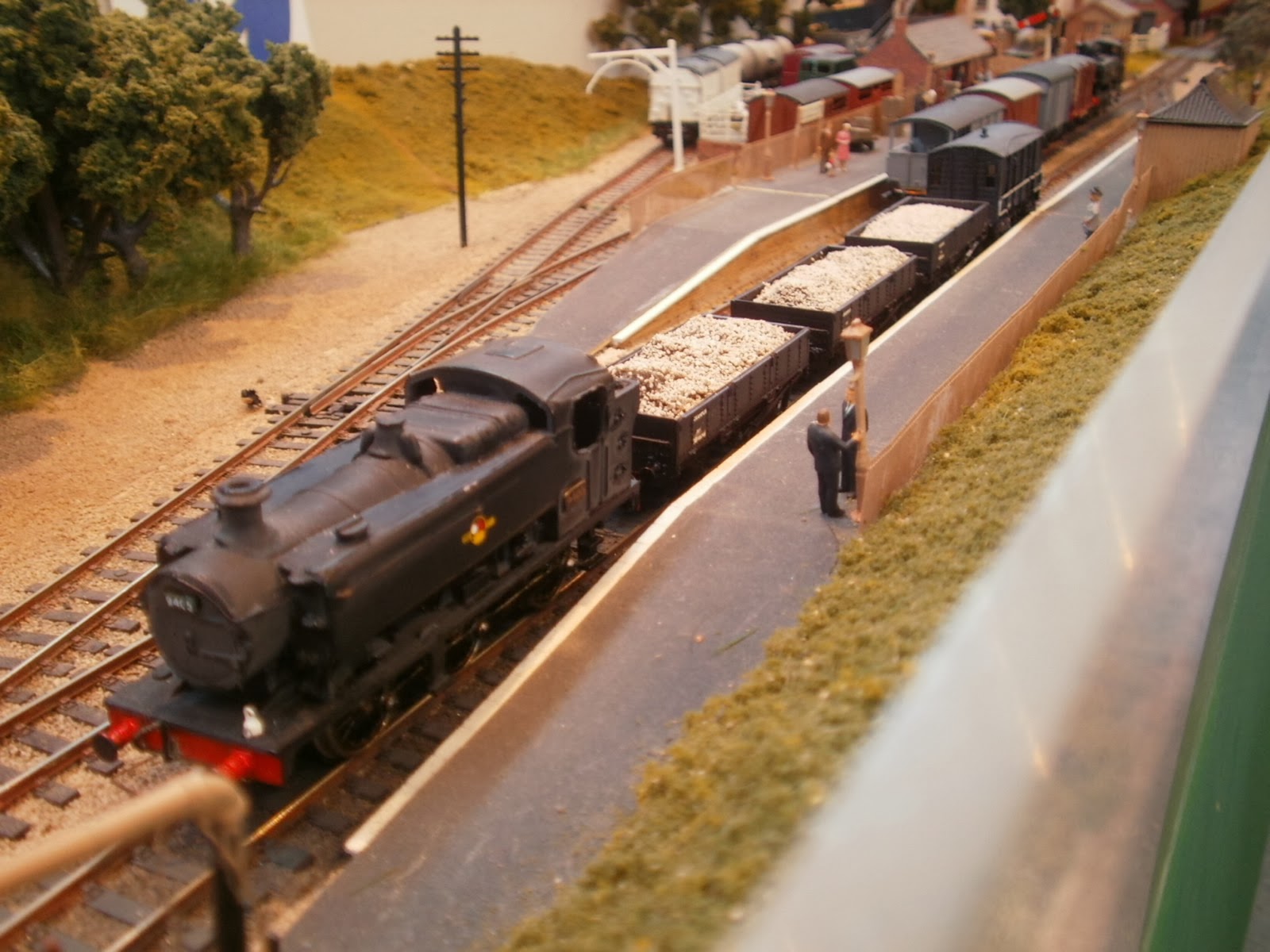 Yes, Hennock is off to Guilford this weekend, 18th January 2014.
This show succumbed to the Great Snow of 2013 but the entries for last year seem to have re-booked.
Do stop and say hello if you attend, it is nice to put names to some who we only know through blogs or e-groups.
Posted by Steve Fackrell at 06:30 No comments: I have been looking for a better way of storing the rolling stock I have amassed over trhese last few years.
It is always a chore to sort out stock for whichever layout we are going to exhibit.
I think I have found the solution- a visit to The Range, I think there are stores nationwide, if not they do Interweb sales, saw me discover these.
Two sets of A4 size drawers set me back the princly sum of £15, a bargain .(Buy one get the other half price).
These should store all the coaches and stock and enable me to mix and match, plus they aren't as heavy as the canteen of cutlery boxes that are currently used, should cut down on the space needed at exhibitions as well.
So get yourself down to The Range, no connection other than a satisfied customer. 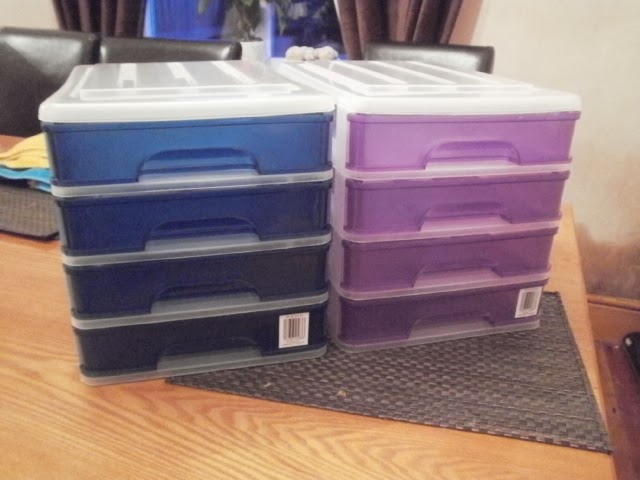 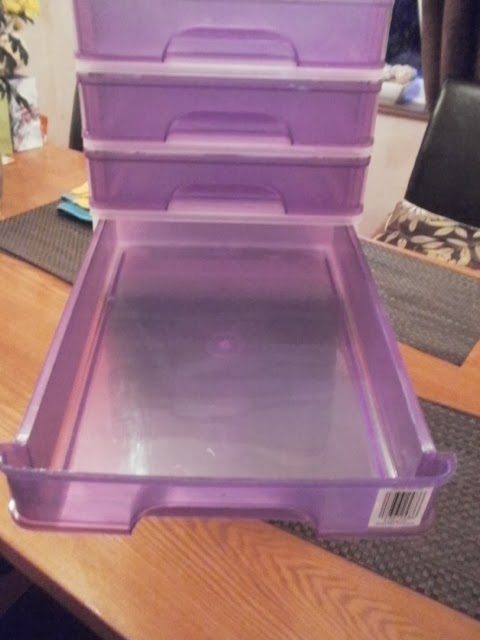 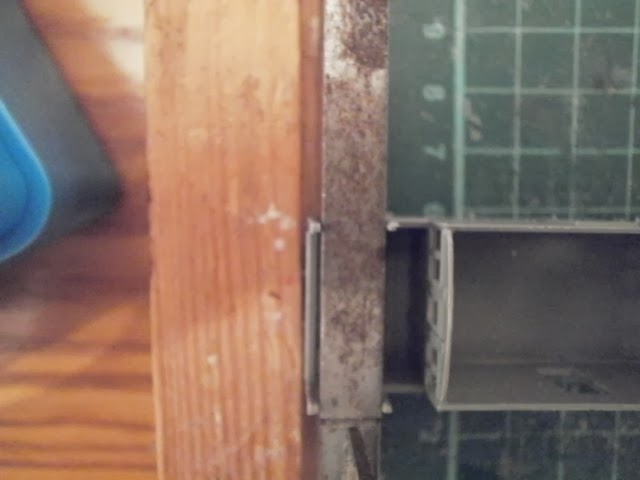 Squares have their uses.
Not only do they enable us with failing eyesight to get thing reasonably how they should be but sometimes they just fit.
The ends of the LMS Brake Van didn't want to sit square and lo and behold what was the right width?
My old metal square- it also has a bit of weight to it so everything should dry- well square!
Posted by Steve Fackrell at 06:30 No comments: 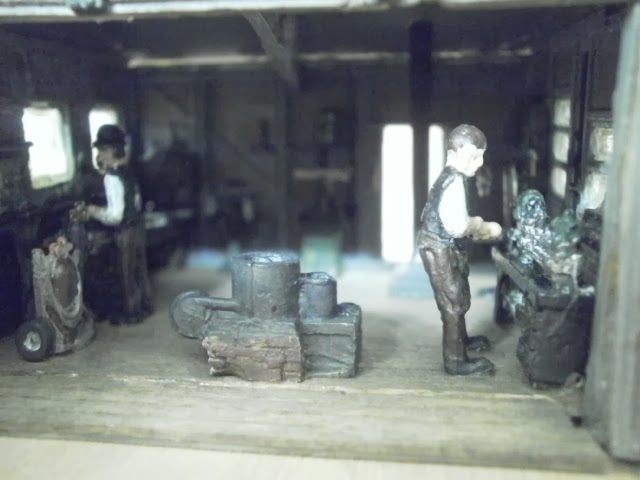 This little gem I got from Tom Rayer- The Weatherman.
I know not of it's origin but would think it is American. It is slightly too big for 3MM Scale but somehow I will get it onto a layout.
Made entirely of white metal it is fairly heavy- but the detail has not been done justice to by my photography.
The floor is wood- nicely planked- which lifts it from just a casting into somthing that has been made with a great deal of patience- 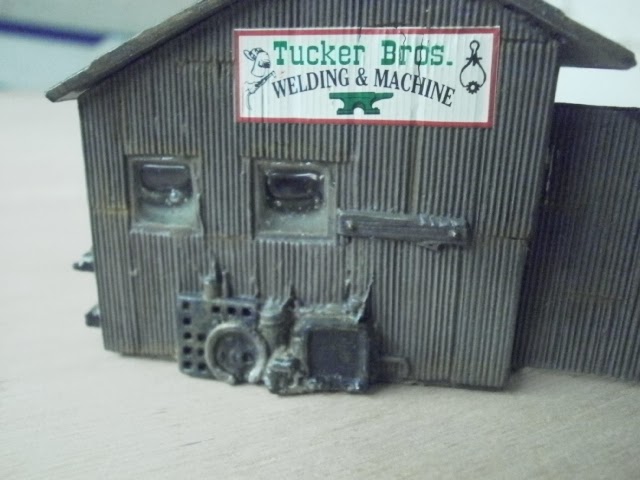 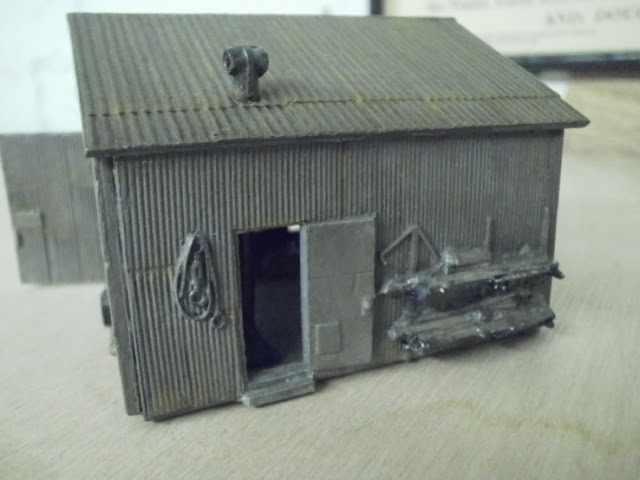 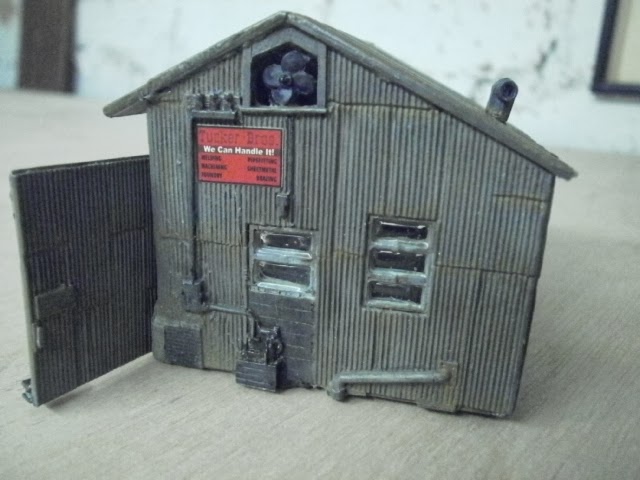 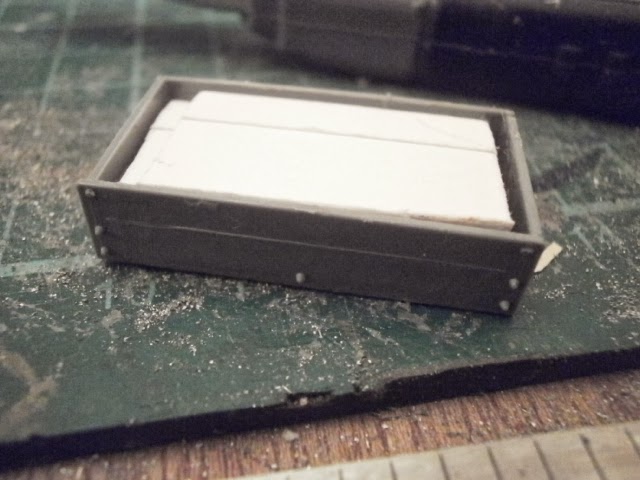 This is where I made the second mistake- the pips are for locating the sides of the weight box- not as I thought-detail! Still, the way I noticed this was that the box didn't fit under the chassis so I carved the necessary pips off and it now all fits!
A chunk of lead spaced with some card provides weight at the lowest point.
Next the sides which fit snugly along the chassis edge- pop the inner ends in before it sets- these are easy as there are locating pips and it all ends up square.
I must say that this goes together very well- look forward to more of the same design. 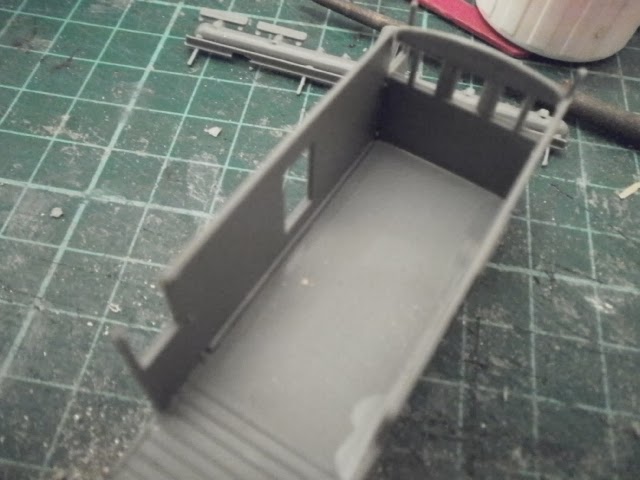 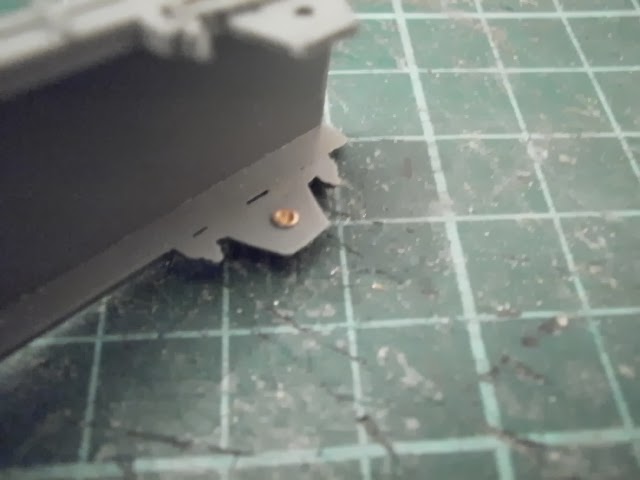 This Cambrian Models kit produced for the 3mm Society has been possible due to a legacy by Eric Bruton. The chassis is a departure from the norm as being moulded in one piece. The bearings slip in after a touch with a broach and enable very free spinning wheels.
Do be careful with the brake shoes- I managed to break two of them due to my over zealous filing to remove the tiniest of burrs!
The axle boxes are also fitted, the next job is to make the weight box for fitting under the body. 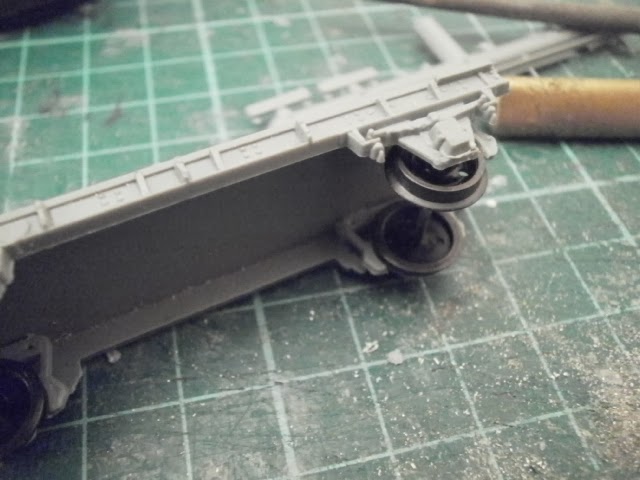 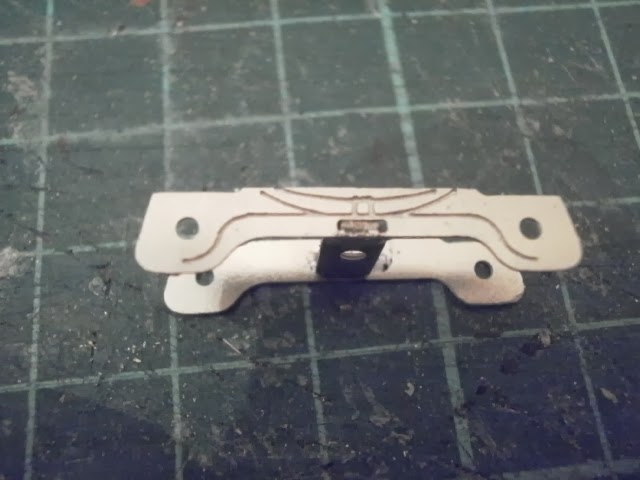 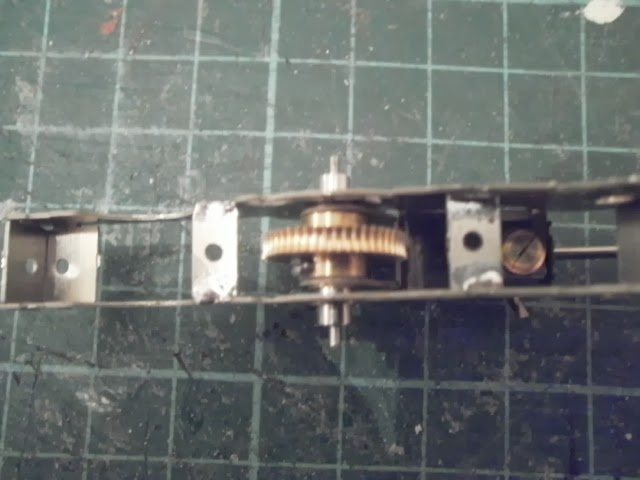 Not much time recently but, at our January Dorset Group meeting i had the chance to do a few hours modelling whilst others of the group ncontinued the dismantling of Swanage.
Imust say that I lke this kit- once you get the frames square and the axles all in a line! Bit of a wake up call to learn new ways of doing things rather than the usual fold up or screw together efforts that I am used to. Anyway this is how far I got in about three hours- chassis together, motor fitted although it needs a bit of work to lower the motor so it goes inside the body- a small problem. 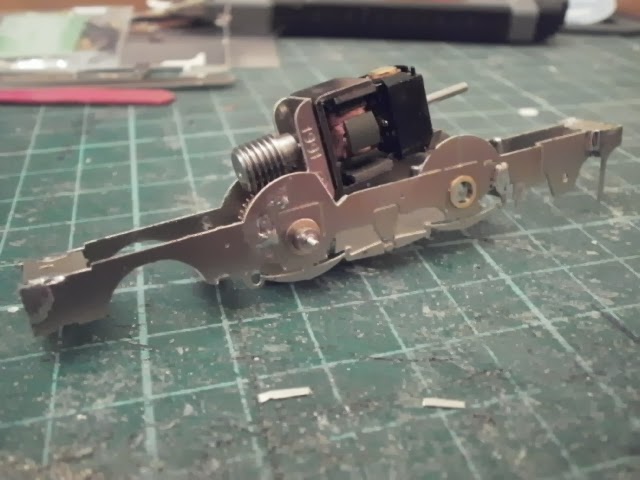 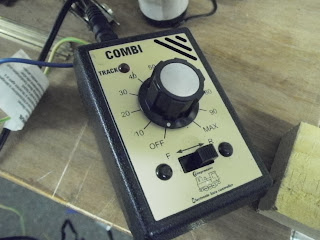 Normally I don't go in for indulgent Christmas presents but this year I thought- why not?
The reason being that I have not had a controller to use unless one of the layouts was in use.
Laziness really as I could have wired up a DIN plug to use on a piece of track but you know how it is!
Visiting a local Model shop recently saw me exiting with this- a Gaugemaster Combi ,which, with a couple of wires and croc clips means I can test wherever or whenever I want.
It doesn't have feed back like the HH's but does the job it needs to
Posted by Steve Fackrell at 06:30 No comments: 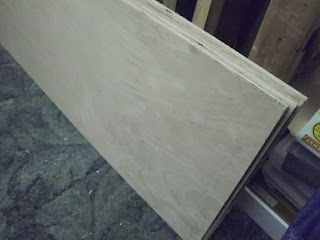 Another year passes and a new one begins- I hope all of the Blog followers had a good Christmas and have a healthy and rewarding New Year.
For me it hasn't been a good year which I won't bore you with, suffice to say this New Year can't be any worse.
So - new year resolutions-
1)  I hope to continue the blog on a much more regular basis although with some 40,000 odd hits this last 12 months would seem that I am doing something right! 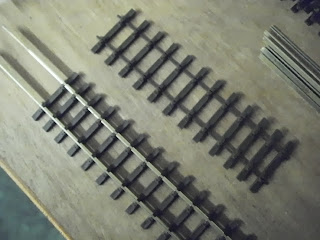 2) The flat packs that I have described deserve to be built, I have most of the components for them so there is really no excuse- just the need to find some time.
3) I really need to sort out my assortment of cuttings and drawings accumulated from the modelling press over the last few years, this means separating the Western from the Southern as will become clear later.
4) The Dorset Group needs more input and there are many visits that have been promised but I haven't arranged a coherent agenda for this year- although the dates and hall are all booked. 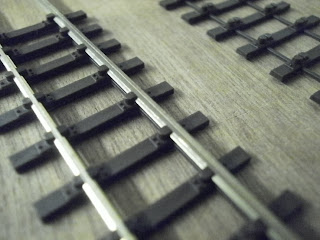 5)  The couplings on all the stock taken to exhibitions needs checking before the show, something which is very time consuming and I have been a bit lazy about- sorry Nigel and Colin!
Talking about couplings reminds me that I need to perfect a new idea which will mean that uncoupling can take place anywhere on the layout without need for wires or ramps which make adjustment neccessary. 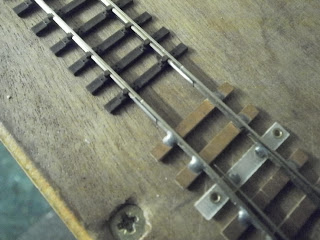 6) Finally- you must wonder what the photos are? Well this is the embryonic East Boldre in 3mm. You may remember me banging on about a previous layout of the same name but in 4mm. I have two four foot boards which are to have 3mm Society track together with some turnouts which have been made by Hugh. I have spent a bit of time threading rail onto the sleepers as can be seen in the photos.
This is a new departure for me and hopefully will improve the look of trackwork on this new layout. Hence the reason for sorting the mags- I need drawings of the Southern , station building, signal box, goods shed et al to portray a part of the New Forest which is dear to me.
I remember the comment about the previous layout of the same name- a lady took some time viewing and then said she knew there was never a station at East Boldre, where she lived, but the trees and landscape were perfect- hopefully I can do this again but in the Premier Scale!