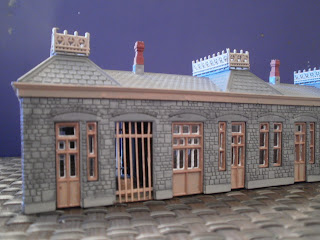 Just about finished the new layout's Station Building.  Built from a Heljan kit, I think it looks reasonably good. I originally was going to change the rather distinctive roof supplied with the kit, but, after trying a couple of alternative arrangements decided to stick (sorry) with the original.
There is obviously some compromises, I could have made the doors and windows from scratch but that would have added a few more hours to its construction.
The photos show the front  elevation, the canopy has to be fitted to the platform side in the top picture. 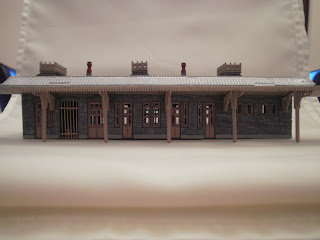 The pic on the left has it fitted roughly in place although the glazing has to be toned down a little before final fitting.
Well, another long weekend, taking my granddaughter to the show at Woodgreen today. There will be miniature steam engines as well as Trains, hopefully it will stay dry.
Looking forward to seeing the murals on the walls of the inside of the hall. These depict life in days gone by and actually include the names of those depicted. I am always fascinated by these, I exhibited there some years ago with my daughters Tri-ang TT layout and have been a fan of this venue ever since.
It is unfortunate that it is a three day show, commitments won't allow me 3 days out.Hopefully a chang next time when I hope to have some live steam pictures.
Posted by Steve Fackrell at 07:14 No comments: 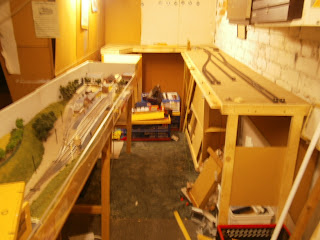 At last I have managed to set up the new layout. Here it stands next to 'Hennock' in my railway room (the loft).
Originally built as a continuous run, it was compromised by curved points-something which couldn't be altered due to the space available. I will only build layouts which fit the railway room, the back of my Focus Estate, andis easily managed for movement.
The layout is 7ft long by 4ft 4ins and will be in a U shape, terminus to fiddle yard. Again a South Devon location as I don't want to have to build more stock.
I have a kit by Heljan of Teignmouth Station which will be the main building-it scales at exact 3mm not the OO/Ho as described. The only thing missing is the fiddle yard which cannot be added with 'Hennock' in place.
The only thing is the name-two are possibles, Canonteign or Teignford. The latter is favourite as I have insufficient letters to make the former on its running in board.
Posted by Steve Fackrell at 10:54 No comments: 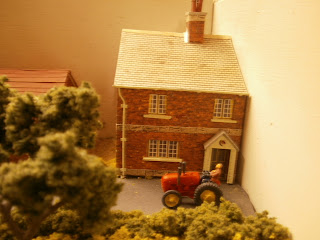 Some time since I did any work on Hennock. The new farmhouse has been placed in it's position, it needs to be bedded in yet. Also in this picture, the tractor now has a driver.
The Bedford that was obtained at the same time is ,unfortunately the wrong scale, nearly 4mm in fact so it is unsuitable and therefore may be sold. 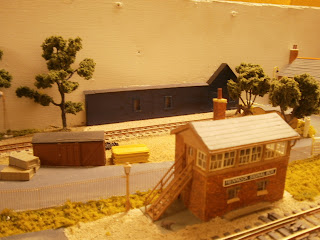 Second shot shows a new low relief building, as yet unnamed, to fill what ,I had always thought, had something missing. I'm not sure of its purpose yet but with the next exhibition looming will have to be sorted. 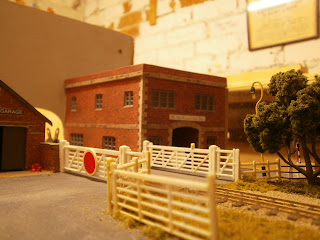 The replacement for the original Cider Factory has been in place some time but I have never gotten round to photographing it. The replacement differs from the original, which was a Bilteeze kit, by having proper windows. The entrance is large enough to place a detachable trailer from the Scammel Mechanical Horse, not a Scarab! Also in this view is one of the street lamps that has appeared.
The next addition is a fence along the line of trees to the new low relief building. These will be Peco'N' gauge ones-with the centre stay not fitted.
Posted by Steve Fackrell at 19:54 No comments:

Out with the old-In with the new. 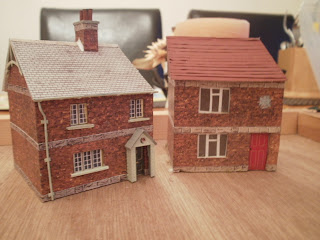 The Wilton Show is fast approaching and it is some time since Hennock recieved any updates.
So, the old farmhouse,on the right, has been rebuilt to something more suitable.See the new one on the left.
The original was a quick build to complete the farm buildings and ,to be honest, went wrong. The windows were too large and making them with paper labels didn't work.
So the old one was removed, measured and the replacement was marked out on mounting card, cut out and covered with the old Builderplus 'N' gauge brickpaper. Windows have been salvaged from an old card kit that happened to be the right size. The porch was fabricated from bits in the odd's box, gutters and down pipes are plastic strip.Chimney pot's, one with a cowl are from the 3mm Society range.
Next is to place in position and secure, most of it will be behind a tree but I know it's there.
Add to this the resoldering of one rail at the baseboard join, replacement fence on the down platform and I think it was a fruitful day. Happy Easter to all.
Posted by Steve Fackrell at 21:00 No comments: 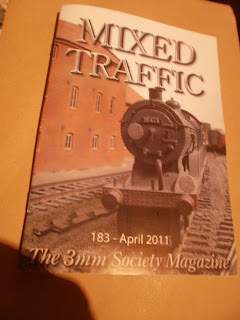 Just as I start my holiday the latest edition of the 3mm Society Magazine drops through the letterbox.
This august publication is the lifeline of the society.
Included in this quarters tome are articles by various members including-
Ambleside Junction, a large tailchaser in 13.5mm gauge.
A Shocvan conversion.
Further revelations on Resin Casting.
Adaptation of a Tri-ang footbridge .
Mods to the Mica kit.
Plus pics of award winning locos and rolling stock.

All in all yet another balanced edition and worth the sub's alone.
Posted by Steve Fackrell at 21:34 No comments: 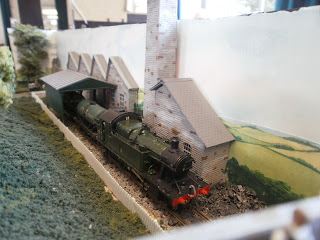 Last weekend I spent a couple of days helping  a fellow member of our Dorset Group,Nigel Cullimore, exhibit his layout, St Leven, at Wimrail.
This is a well thought out 3mm layout just 5ft long on one board.The pic shows his 2-6-2T Prairie alongside the dairy attached to a couple of 6 wheel milk tankers.
Nigel use's Spratt & Winkle couplings with carefully concealed magnets. However we have found that some small ceramic magnets do the job just as well. These, used in multiples of four operate the couplings through the 9mm baseboard and mean that uncoupling can be carried out anywhere on the layout, not in fixed positions which can catch you out if using longer wheelbase stock.
The weekend was most enjoyable and an excellent exhibition also. The pint of Hopping Hare on the way home in glorious Dorset evening sunshine finished it off just right!
Posted by Steve Fackrell at 21:10 No comments: 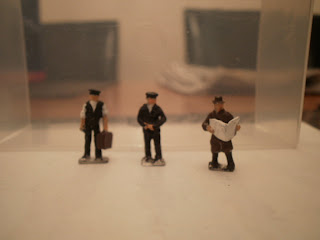 Having had some idle time whilst awaiting the arrival of my new Grandson, one doesn't want to get too involved in a project. Hence some new people for the next layout. I have experimented with acrylic paints for a change and am quite surprised by the result. I didn't expect the colours to be so opaque-I have always used enamels previously. Add to this the need to wash the brush in warm,soapy water and it enables me to put the brush down very quickly when needed.

This is a small sample and I hope you, like me am impressed.
By the way, tomorrow see's me at Wimborne Model Railway Exhibition. I am helping Nigel Cullimore exhibit his delightful 3mm layout, St Leven. Please come and say hello.
Posted by Steve Fackrell at 21:06 No comments: