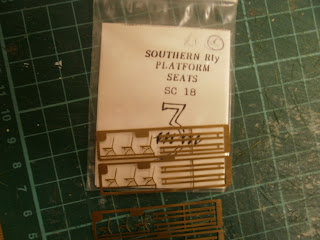 This small kit of etches is just what it says on the packet.
A pair of etches done for the 3mm Society by, I think, Springside- I am sure I will be corrected.
As some will know my next project will be a British Railway Southern Region layout named East Boldre.
This is a name I have previously used for a 4mm layout which I sold several years ago.
I have always had a soft spot for the Southern having grown up alongside the Bournemouth mainline and always been within a stones throw away.
This will explain the increasing Southern projects that will appear over time.
Posted by Steve Fackrell at 06:30