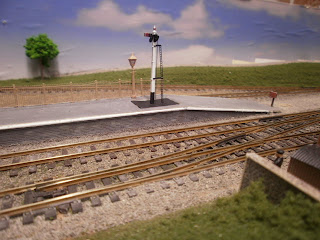 Firstly I must appologise to those present that I forgot my camera. A new venue and I was looking forward to relaying some images of our new home- moving on!
Six members attended and the general concensus was that we have made the right move. Further for some I know but the facilities far outweigh the disadvantages.
Nigel brought St Agnes to do some more wiring- the layout is due to appear at the Bournemouth Show but so far no official invite has been forthcoming- very unprofessional! 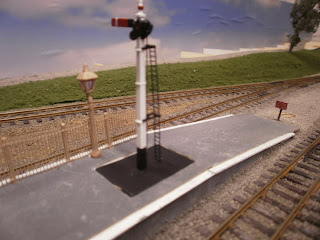 Dave has decided to use proprietry track on his Irish Narrow Gauge layout due to issues with his handbuilt track. Robert was working on his 'O' Gauge bridge for the Purbeck Group layout. Colin produced his latest purchases, LSWR M7 and coaches.
I took the opportunity to move the starter signal on Teignford. This involved making a slot in the platform and a new hole in the baseboard for it to fit. Thanks are due to John Boocock for pointing this out before I went any further- power of the Blog!
Altogether a fruitful afternoon with ample space and good refreshment facilities- Roll on February 2nd when we have our annual Bring and Buy.