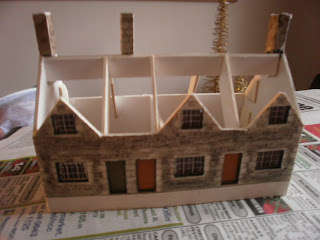 This has been made from one of the sheets I picked up at the Society West Byfleet meeting in November.
Braced with artists mounting card, the window aperatures were removed and reapplied after the rebates had been painted Matt Black. This gives some depth and relief over an otherwise flat surface. However, I should have used thinner card behind the windows on the upper storey as it is making the roof more difficult to apply than it should.
So that thinner card can be used for the roof I have inserted some beams to support the roof.
Doesn't look too bad though, I have another to build plus some interlinking single story abodes.
Posted by Steve Fackrell at 06:30