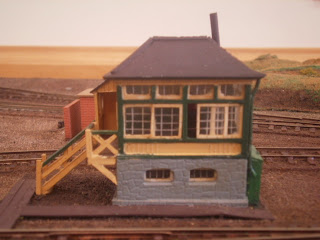 Something surprising happened at our July meeting.
The picture alongside may provide a clue. It is ,of course , unmistakeable -Swanage Signal Box.
The group has taken custody of a layout I have been trying to adopt for some time. It sat, unloved, in a display cabinet in the booking hall of Swanage Station for several years. Layers of leaflets hid what is a remarkable 3mm scale layout of Swanage Station.
Unfortunately I don't know the name of the builder but the layout was given to the railway as we have aquired it.
Originally the Engine Shed section was attached but skipped due to lack of space. More Anon!
Posted by Steve Fackrell at 06:30