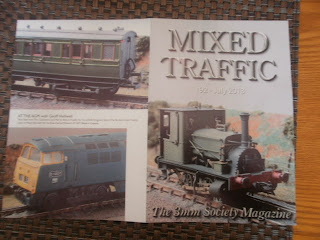 This quarters Mixed Traffic arrived a couple of days ago.
This issue, Number 192, is up to its usual high standards starting with an editorial, by John Sutton, discussing the 75th Anniversary of Mallard setting the world speed record for steam locomotives and the GEM model released a srprisingly long time ago.
With details of the 2013 AGM and the chairman, Wim Harthoon getting the ball rolling for the 50th Anniversary challenge the rest of the content is similarly inspiring.
Stephen Moor continues with the BR Class 5 build whilst Howard Love builds the Worsley Works GWR footbridge. David Schiebaan relates the creation of a new chassis building jig and Dennis Smith describes his layout move to France. Another Smith, this time Alan, relates his building of a Crane Runner Wagon.
Add to this some excellent photography of competition entries and more evocative shots by Eric Bruton.
There is little room left for the usual Blastpipe and Q&A's but an absorbing read as usual.
The day before MT arrived, the sad news was recieved of the passing of Peter Gentle. I was priviledged to have met Peter on many occasions and  considered him to be one of lifes Gentlemen. Nothing was too much trouble,  encouragement and advice being freely given. He was responsible for several buildings at Pendon and many memorable layouts many of which were published in the Model Railway Press.