Starting the fiftieth year of the 3mm Society, the January edition of Mixed Traffic has arrived.
The editor, John Sutton reminisces about his trip to the first 3mm Society meeting, the day before Valentines Day 1965 and continues suggesting the intended published words in this years editions.
In a varied edition Roger Pells describes the first installment of a 3mm layout from the sixties whilst Nigel Brown adapts a couple of Society wagon kits from drawings of Rhymney Railway prototypes.
Richard Osborne guides us through the creation of transfer lettering for PO wagons using computer software and Crafty Paper. 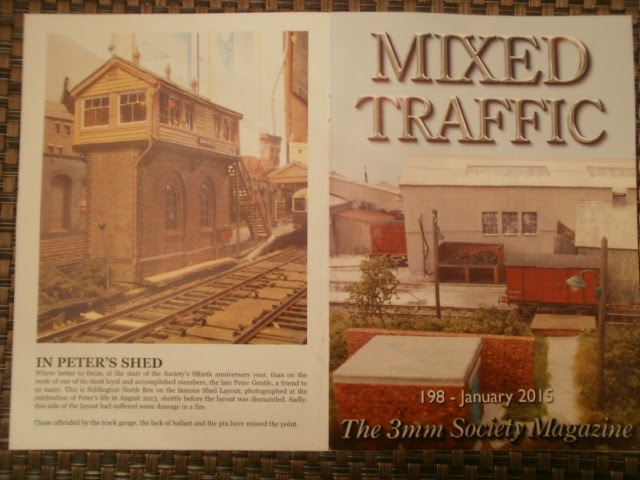 Photographs include some classic shots of models and some not so classic of young members!
Hoath Hill Mark 3 is a reduced version of Peter Bossums celebrated layout whilst Chris Ellis looks back at the early days of TT3.
As usual there are a couple of Eric Bruton's classic photos, this time the subjects being a Jubilee on a goods train and a Black Five near Eden Valley Junction on the northern climb to Shap Summit.
An informative Blast Pipe, Bits & Pieces and Tail Lamp wrap up another credit to the editor- but the best bit is kept for the back cover-a photo of Siddington North Signal Box made by Peter Gentle. Peter was one of the most loyal and accomplished members and I had the pleasure to spend time with him on several occasions.