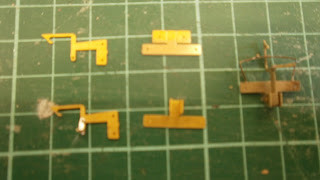 To attach each piece of rolling stock to another I use a Worsley Works etch. These are called West Harptree couplings, so called because they were developed for use on Mike Corps layout of that name.
Consisting of a two part etch, a hook and a carrier/pivot, these can be obtained in brass or nickel silver. They are very much like the Anita couplings produced by peco/ Tri-ang for many years. They are much finer and closer coupling can be achieved. 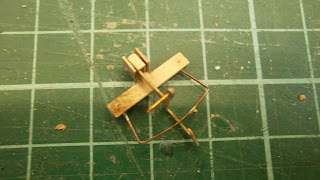 Firstly a brass pin is passed through the dropper on the hook and soldered. A half  loop of phospher bronze wire is formed and attached to the carrier with a short upright piece soldered to the left side, this to prevent buffer lock when pushing. A pin is passed through the pivot to make the finished coupling as on the left. I usually batch build these with the other coupling for each piece of stock just having a half hoop and upright.
Uncoupling is by a wire between the rails biased to one side, this is allowed to move in a loop at the other end-when under tension the couplings ride over, when reversed the wire lifts the coupling thus allowing stock to be parted.
Posted by Steve Fackrell at 08:21