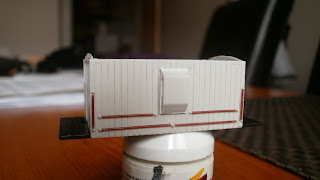 Have now got to the stage of assembling this kit. The handrails are located by pips formed on the sides of the van. I find it hard to keep handrails straight using this method so, as I did with the GWR Brake, I am locating the handrails between the pips.
Using fine plastic rod, this was meked into place as seen in the pictures.
The lookouts were mounted on thin plasticard as suggested in the instructions and will be glazed once the body has been painted. 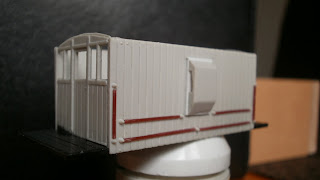 I had considered glazing the lookouts before painting but thought that masking  would prove too difficult to remove. So I will try some PVA to provide glazing for these.
Next, the ends need to be attached and then the chassis after the pin point bearings have been inserted.
Posted by Steve Fackrell at 10:55